Nihon University currently consists of fourteen colleges, twenty-two graduate schools, a correspondence division, a junior college and various research organizations. In addition, there are junior and senior high schools, a kindergarten, hospitals and other institutions affiliated with Nihon University. The College of Art began as the Department of Aesthetics within the Law and Literature Faculty in 1921. It became a college in its own right following the institution of the revised education system in Japan in 1949. The College of Art has maintained its artistic ideals through trying times and remains committed to providing a comprehensive education and producing original research in the various fields of the arts. 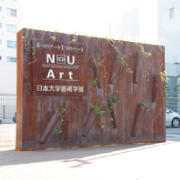